You guys, I had a really long day Tuesday.

Steve and I woke up at 5am to drive 5 hours to go to the Bay Area, for a day, to see a concert, and drive back home after said concert.

It was totally worth it.

Even if I awoke Wednesday morning feeling and looking as if I had been hit by a car.
Bags for days would have been an understatement.

We went to see Two Door Cinema Club, for a second time, and once again, they were awesome times a hundred. They’re a load of fun, + they know what they’re doing with lighting + their music is spot on + they manage to have great opening bands. (more about them in another post soon)

Also side note: if you ever have the chance to see a show at the Fox Theater in Oakland – do it. I could not get over how gorgeous of a venue that place is. 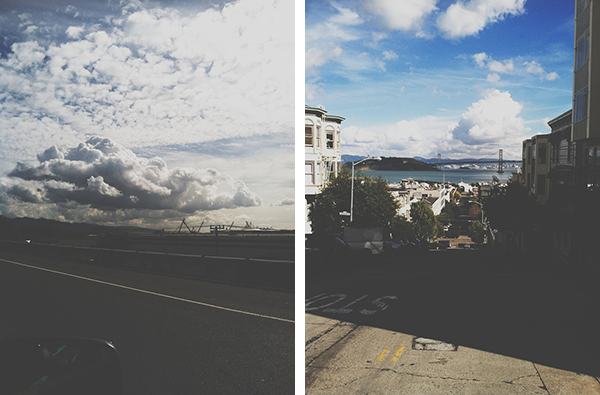 Besides the concert we managed to:

*Get lost in Oakland – best thing ever but seriously not really at all
*Grab lunch with our friend Joey
*Get a tour of the Joby office from him
*Get a tour of a strip club filled neighborhood by default on the way to lunch
*Take a mini hike that got me that shot above on the right
*Get some shopping in, resulting in a kick ass western cord shirt that will probably be used in my first ever style post say whaaat?!
*Stay up for almost 24 hours which resulted in these weird mini dreams on the ride home where I fell asleep for a second and the Walgreens sign quickly flashes in my head and changes from “walgreens” to “wet babies”.

I know you all wanted to know that. you’re welcome.

I should also let everyone know that I am at a semi pro level when it comes to the Bart system. Just saying.

And lastly I should also leave you with a video from Two Door Cinema Club’s latest album that just adds to their awesomeness. Also those dancing girls in their fashionable outfits: I can’t get enough of ’em.