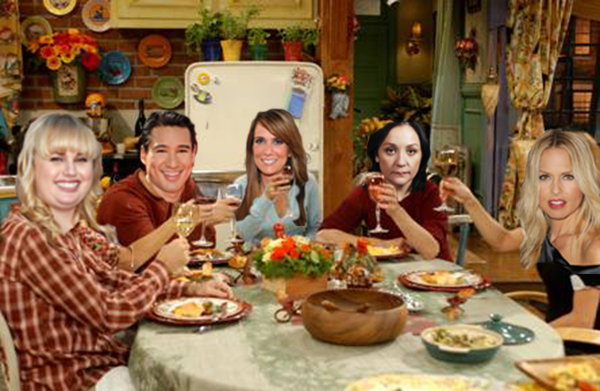 Cue Friends Thanksgiving above. I redid the invites from last year, and only re-invited Kristen Wiig. I know usually people say that if they could invite anyone to dinner it would be Jesus or Abraham Lincoln or maybe a Jesus Lincoln Hybrid? I just don’t have that kind of self control.

The guests that were invited this year include, L to R:

I’m not prepared, but am totally taking the whole “don’t be a crazy bitchface because it’s just Thanksgiving” thing full force.

Just in case you’re curious, here’s a link to what last year’s Thanksgiving consisted of. And some pumpkin cheesecake. And a photoshop explosion.

I’ve definitely started a pinterest board for dinner inspirations. Because I’m always so organized. Not.

I’ve also definitely decided to ditch the turkey. I’ve decided I don’t like the texture of turkey, especially the day afterwards, no matter how not dry it cooks up. There’s just something about it too that’s sort of gamey if you don’t buy the right bird.

I’m opting for a couple roast chickens. They’re cheaper, there’s no thawing issues ever, I can probably  prep and cook one with my eyes closed, the leftovers are awesome, no gameyness, and you can cook it even faster.

If you think I’m being too sacrilegious, calm down. Here’s a way to cook up a fierce turkey for your familia. I totally understand if you fear someone will hit you for not cooking up a giant bird.

Or be an extra sneaky trickster and cook up the chicken and break it down, present it beautifully, and tell everyone you bought pygmy turkeys.

Out of the Box: Cheeseburger Macaroni Explosion