Make a Fierce Turkey for Thanksgiving 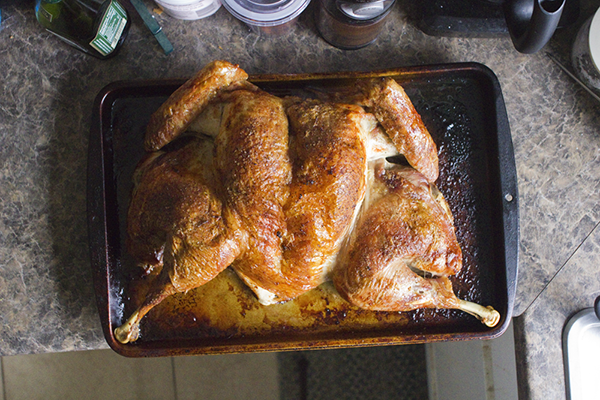 Now, I know any of you that stumbled upon this through foodgawker or another food site are probably freaking out as to what to do with your turkey this year. Maybe it’s your first turkey? Maybe you’ve been cooking it for 20 years and wanna spice things up a bit. Let me just tell you one thing: SPATCHCOCK

Spatchcoking your turkey is simply removing the backbone so it can lay flat and cook in less than half the time. no fussy brining: I have done this in the past and it makes a delicious turkey, but there’s usually some battle as to figure out a container big enough to brine. Who has one of these? True story: Last year I couldn’t find a container so I just bought one of those turkey cooking bags and it bust open, leaking brine grossness all over the fridge. So, don’t do that.

no questionable 4 hour cooking time: 80 min for a 14 lb bird. Done. This girl goes in and comes out in less than an hour and a half. And she looks good. plus, don’t you have a pie to bake?

no dry turkey: Dry turkey is the worst. Almost like someone took a piece of chalk and wrapped it in golden skin. and it’s somehow gritty? I wanna punch someone in the face or throw a kitten out the window just thinking about it.

Now, I know what you’re thinking:

Billy, I wanted a whole turkey that I could impress a crowd with!

Calm down Norman Rockwell. Whole turkey’s are overrated, and they aren’t fierce. Plus unless you take several necessary steps, it will probably come out dryish. And I will flip a table faster than Theresa if someone serves me a dry turkey.

But I wanted a whole turkey to put some stuffing in!

Well, that’s gross. and there’s a possibility you could give me food poisoning. I won’t be able to flip a table as fast that way, but I’ll make it happen. do everyone a favor and make a giant batch of stuffing an serve it in a pretty bowl, and not the tiny cavity that used to be the inside of an animal.

I discovered this awesome technique through an awesome blog, The Bitten Word, who grabbed it from Martha Stewart. You are more than welcome to go there to see some plating options or even a how to video! I’ve used this technique for the past few thanksgivings with awesome results.

Also a good source for a turkey, if you have one around, is Safeway or Vons. Fresh, never frozen all natural turkeys, for .99 a lb. It’s not organic or free range or anything of that nature, but it’s affordable and probably the next best thing.

To Spatchcock, it’s quite simple. Slightly daunting, but simple:

Rinse the bird, pat it dry with some paper towels. Remove all the extra goodies, flip the bird breast side down, and cut along either side of the backbone with a good pair of kitchen shears. Take this backbone and save it for some stock with the other goodies.

Flip the bird back over and with all your might, push down to break the breastplate. Splay it like it is above, and tuck the wings in so they won’t burn. Lay it out on a sheet pan and make sure nothing’s hanging over, lest you want burnt turkey bits on the bottom of your oven.